Arrow Electronics: Not Enough For An Investment (NYSE:ARW)


We are cautious about Arrow Electronics (ARW). From a valuation standpoint, the company doesn’t offer much of an upside as it’s trading in the top range of its historical EBITDA multiple. The company was experiencing some top-line deceleration starting in their 2019 second quarter when they posted negative quarter-over-quarter sales growth of 0.6%. That trend started accelerating throughout the rest of 2019, not counting the divestiture of their PC and Mobility segment.

It’s still too early to understand what impact COVID-19 is going to have on the short- and medium-term outlook for the global economy. First quarter results for their fiscal 2020 showed revenues declining 11% year-over-year. Arrow’s management is guiding sales to be in the range of $6.1B to $6.7B with EPS in a range between $1.38 to $1.54. That represents a very diminutive sequential improvement over first-quarter results if we take the mid-point of their sales guidance and a decline of 12.8% YoY.

Guidance by the company shows some optimism if compared to close competitor Avnet (AVT), which declined to comment on next quarter’s results. Still, we believe the sector might remain depressed as economic uncertainties stand on the way.

There were uncertainties even before COVID-19 hit the markets

The big news in the sector came in October of last year when Texas Instruments (NASDAQ:TXN) announced a change in strategic direction by canceling distribution agreements with six entities. The most affected business from such a decision was Avnet, Arrow’s main competitor. TXN accounted for 10% of Avnet’s total revenue so it clearly had an impact on their operations. The distribution agreement is set to expire by the end of 2020

The decision of TXN to cancel its distribution agreements was so they could build a more direct relationship with their end customers and reduce operating costs. It also signals a change in the business model and the relationship between supplier and distributor.

The distribution business is by nature a low-profit margin business. Scale and volume allow distributors to achieve profitability even if margins are low. Low margins also act as a barrier to entry. Competitors entering the space would need to build an extensive network of suppliers and customers to become profitable, and that’s where the problem lies. It’s hard to get customers if your supplier network is small and vice versa.

To boost margins, more distributors also are offering value-added services. It adds to the cross-selling opportunities within the company. Once a distributor builds a relationship with a customer by shipping inventory orders, they could start offering other services such as supply chain management.

There’s also the added effort by distributors to create what they call “demand creation.” Demand creation simply means the role of a distributor to get their supplier’s products very early in the engineering process of OEM’s designs. It’s also a higher margin business as distributors would get a higher profit margin on the components sold to the OEM design win.

As suppliers have become more specialized, and have opted to support fewer accounts directly, they’ve shifted many sales and technical responsibilities to distributors. – edn.com

However, “demand creation” doesn’t come cheap, as distributors would have to invest in specialized headcount, mostly engineers. For example, Arrow purchased eInfoChips January 2018 for $327M. The description of eInfoChips is as follows:

eInfochips services customers at every phase of technology deployment, including custom hardware and software, and new Internet of Things based business models – ARW 2019 10K

The move by TXN could signal a big change in the way distributors and suppliers build relationships. It is clear that TXN didn’t want to share its profits with distributors. Would that mean more suppliers would follow suit? It is hard to tell at this point. However, TXN is a huge corporation, which makes the strategic choice to cut ties with distributors a feasible one to them. They have the resources to build that direct relationship with their end market customers. For smaller and mid-sized competitors, distributors still offer the most cost-effective solution to bring projects to them. Like we previously mentioned, it doesn’t come cheap to build a specialized sales force.

There’s always been a tug-of-war between suppliers and distributors over “ownership” of customer relationships. While distributors sell components to end-customers, they do so on behalf of their suppliers. Component makers such as Texas Instruments are now taking these relationships direct. Texas Instruments is particularly well-equipped to manage direct customers. – epsnews.com

One of the strong characteristics of Arrow is its countercyclical cash flow generation. In times where there’s less demand for products, Arrow can shift its working capital to become a source of cash. For example, during their fiscal years 2007 through 2009, Arrow was able to generate free cash flow as they reduced their inventory balance from $1.7B in 2007 to $1.4B by 2009. Within that same time frame, Arrow generated $2.3B in cash from operations with changes in working capital contributing $1B. Of course, that’s not a sustainable source of cash, but it does provide a safety net when growth starts slowing down.

Besides having an ability to generate cash flows in times of distress, Arrow also has a strong liquidity position of $1.8B in an undrawn revolver credit. Although we believe they don’t have the need to use it as their balance sheet looks stable, with only 2.7x in Net debt to EBITDA. 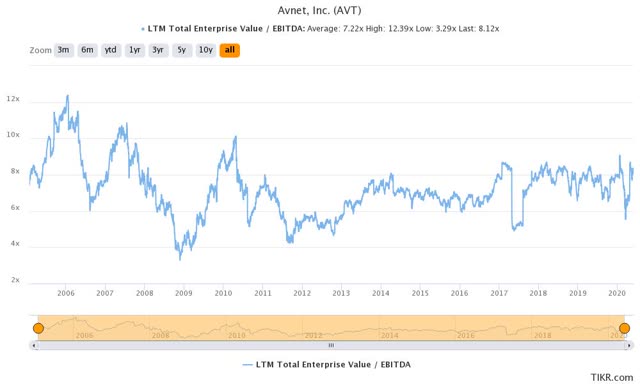 If we look at Arrow’s trailing EV/EBITDA multiples for the past 15 years, we find that the firm is trading at slightly above its historical average of 7.22x. However, if we focus our attention on the last decade, Arrow is trading at the high end of the multiple ranges between 6x and 8x.

We believe the market is correctly pricing the future expectation of the company. At this point, there’s not much to get excited about. The company is well run, has a solid balance sheet, and can generate lots of cash even in hard times. That said, from a valuation standpoint, Arrow lacks an appealing risk/reward asymmetry as it seems fairly priced. We even caution that the downside is greater at the moment as we are facing an economic recession, and there’s still no visibility as to when COVID-19 is going to be contained. The increasing tensions between the U.S and China also would affect the top line of Arrow as they do significant business in the Asia-Pacific region, which accounts for 38% of sales. To top it off, there’s the uncertainty of the relationship between suppliers and distributors. The move by TXN also could be adopted by other big suppliers in the industry. For all of these reasons, we remain cautious about Arrow and have a neutral stance.