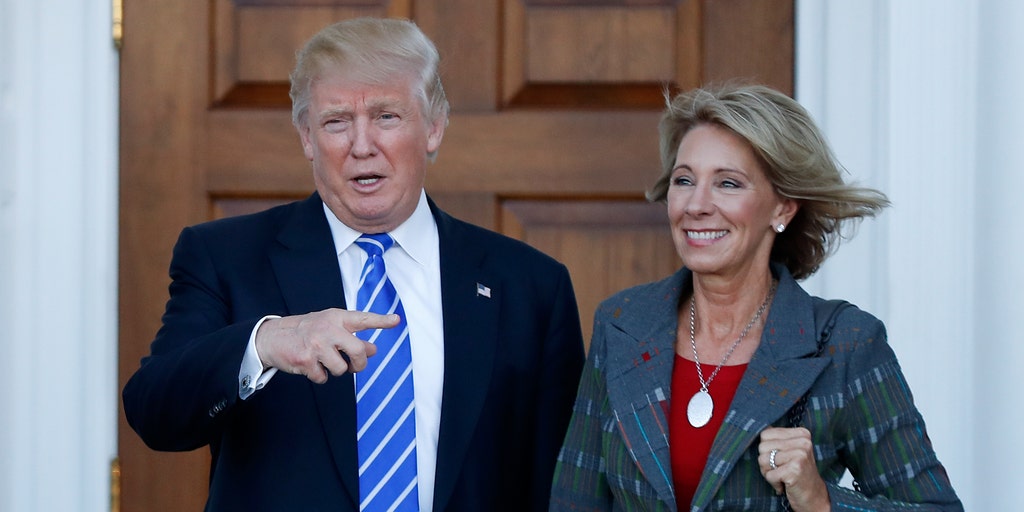 President Trump and Education Secretary Betsy DeVos are endangering the health and lives of millions of children and their families by demanding schools around the country reopen for in-person classes as the coronavirus pandemic continues.

In addition, Trump and DeVos are using the pandemic as an excuse to intensify their war on public schools, public school teachers and teacher unions. They want the American people to believe that public schools do a lousy job and that teacher unions are only interested in fattening teachers’ paychecks and protecting incompetents.

The president and education secretary seem to believe the only way students can get a good education is to abandon public schools and enroll in charters or private schools.

TRUMP WANTS $105B FOR SCHOOLS ADDED TO NEXT CORONAVIRUS STIMULUS BILL

When he announced July 23 that he is asking Congress for $105 billion for schools as part of the next coronavirus stimulus bill, the president said: “If schools do not reopen, the funding should go to parents to send their child to [a] public, private, charter, religious or homeschool of their choice.”

“If the school is closed, the money should follow the student so the parents and families are in control of their own decisions,” the president added. “So we’d like the money to go to the parents of the student. This way, they can make the decision that’s best for them.”

Senate Republicans have said they want to provide $5 billion for vouchers to send low-income public school students to private schools under their proposal for new coronavirus relief legislation.

The president’s attack on public school teachers and unions makes about as much sense as Trump’s prediction about the coronavirus Feb. 28, when he said:  “It’s going to disappear. One day, it’s like a miracle, it will disappear.” Instead, there have been more than 4.4 million confirmed cases of COVID-19 (the disease caused by the novel coronavirus) in the U.S. and more than 152,000 confirmed deaths.

As a high school social studies teacher and co-chairman of the United Teachers Los Angeles at my school, I know that the president’s view of public schools is as distorted and erroneous as his view of the coronavirus pandemic.

Yet with the school year set to begin in just a few days or weeks around the country, astonishingly little has been done to prepare to reopen schools. Most schools have been closed for in-person instruction since mid-March due to the pandemic.

I certainly don’t want to do anything to endanger the health and lives of my students or their families.

The president seems to feel neither he nor the federal government are responsible for any of this preparation. According to Trump, the buck always stops somewhere else — certainly never with him.

Like every teacher I’ve ever known, I entered the profession because I care about kids and want to give them the best education possible. But I certainly don’t want to do anything to endanger the health and lives of my students or their families.

Teacher unions have rightly balked at throwing kids into schools without the necessary precautions in the middle of a COVID-19 surge. But Trump has scapegoated us for his own callousness and striking lack of foresight, and then used the pandemic crisis to push the anti-public school agenda that he and DeVos have embraced.

Trump and DeVos clearly understand little about life in big city schools. In the Los Angeles Unified School District, 80 percent of students live at or below the poverty line. In New York City schools the figure is 73 percent. In Detroit it’s 86 percent.

DEVOS RESPONDS TO THREATENED TEACHER STRIKES, SAYS KIDS CAN’T BE ‘CAPTIVE TO OTHER FEARS OR AGENDAS’

One of my best students lived in her living room with two of her siblings for two years. Before that, she and her family lived in a church basement without electricity. I was surprised when I found out. She was surprised that I was surprised — her life, difficult as it has been, is not uncommon.

If these kids come home with COVID-19, their entire families are most likely going to get it. Moreover, several generations live under one roof. While doctors tell us that it is very rare for children to die from the coronavirus, the kids could very well come home with the virus and transmit it to a parent, grandparent or other family members who could become critically ill or die.

n the face of this health crisis we need what teacher unions have been calling for — significant federal investment in our schools to properly prepare them to reopen safely. Instead, Trump and DeVos are seeking to incite parents against the teacher unions that are trying to protect their children, and want to turn parents away from public schools.

Usually, charter schools are the weapon that conservatives wield against public education. With their select cohort of students, charter schools can garner artificially inflated standardized test scores for conservatives to hype. This time Trump and DeVos are pushing vouchers, but there are numerous problems with these programs.

Moreover, vouchers are ineffectual. The educational advocacy organization Public Funds Public Schools summarizes a litany of voucher disappointments: “Studies of voucher programs across the country have found that students who participate in private school voucher programs fare worse academically than students educated in public schools, and in some cases dramatically worse.”

Education historian Diane Ravitch describes North Carolina’s private school voucher program as “nothing more than a pass-through of public money to parents who want their children to have a religious schooling, without regard to quality.”

Yet evaluations of D.C.’s Opportunity Scholarship Program found that, among other problems, math scores were significantly lower for students who received and used the voucher than for students who applied but did not get the voucher and who remained in public schools.

Biden has courted teacher unions. Conservatives falsely portray him as our puppet. However, the Obama-Biden administration was not particularly sympathetic to teacher unions — it promoted charters as well as the “test and punish” regime tied to standardized test scores.

Obama’s Education Secretary Arne Duncan was hostile to teacher unions during his tenure, and later denounced United Teachers Los Angeles on the eve of our successful January 2019 strike.

While former Democratic presidential candidate Sen. Bernie Sanders of Vermont correctly condemns charters as a drain on public school finances, Biden’s “Plan for Educators, Students, and our Future” is silent on them. However, Biden does make important proposals regarding special education, school psychologists and counselors, and vocational programs.

COVID-19 and the school reopening crisis have put education front and center as the election approaches. Republicans are using the crisis as an opportunity to push policies that harm public education and serve the few, while writing off the many. It is teacher unions that are fighting for what children need — safe, properly funded public schools.

0
Houston is the latest city to announce fines for residents who refuse to wear masks in an effort to control the spread of...
Read more

0
Good morning and welcome to Fox News First. Here's what you need to know as you start your day ...Ted Cruz slams Dems...
Read more

0
South Dakota Republican Gov. Kristi Noem praised the people of her state for working with her administration to both keep the coronavirus largely...
Read more

0
Soon after President Trump called Tuesday’s massive explosion in Beirut an “attack” and “a bomb of some kind,” citing information from “some of...
Read more

0
BALTIMORE -- A season of delays produced another one for the Miami Marlins.The start of Miami's first game in nine days was delayed...
Read more

0
Houston is the latest city to announce fines for residents who refuse to wear masks in an effort to control the spread of...
Read more
News

0
Good morning and welcome to Fox News First. Here's what you need to know as you start your day ...Ted Cruz slams Dems...
Read more
News

0
South Dakota Republican Gov. Kristi Noem praised the people of her state for working with her administration to both keep the coronavirus largely...
Read more
News

0
Soon after President Trump called Tuesday’s massive explosion in Beirut an “attack” and “a bomb of some kind,” citing information from “some of...
Read more
News

0
BALTIMORE -- A season of delays produced another one for the Miami Marlins.The start of Miami's first game in nine days was delayed...
Read more
News

Alex Berenson proclaims COVID-19 spike in Sun Belt is likely ‘behind us,’ more evidence against lockdowns

0
Recent developments in the coronavirus pandemic should confound supporters of strict lockdowns and other edicts meant to contain the spread of the disease,...
Read more