Telefônica Brasil S.A. (VIV), referred to as Vivo throughout this article, is the Brazilian telecommunications industry’s market leader. Vivo is a telecommunications company that offers mobile and broadband services to individuals and companies throughout Brazil. The industry is very concentrated, with over 98% of the market belong to four companies. Oi filed for chapter 11 bankruptcy in Brazil and is expected to sell its mobile unit to Vivo, TIM, and Claro. If this sell occurs and is approved, this industry will be even more concentrated.

Vivo is a Brazilian company with ADRs listed on the NYSE. An investment in Vivo exposes investors to foreign exchange risk, the Brazilian Real. The Brazilian Real has been very volatile throughout 2020. Even if the company’s equity value increases, a large enough devaluation of the currency could cause investors to lose money.

What Is Happen In The Brazilian Telecommunication Industry

While I was analyzing Tim Participações S.A. (TSU), I found data that supported a trend that I had noticed occurring around me. A couple of years ago, when I would give my number to working-class people, they would ask me who my service provider was. These people weren’t doing a market survey. They wanted to know so that they would call me using the same service provider so that the call would be cheaper. Once service providers started offering their prepaid customers a plan that allowed them to call any service provider at the same rate as within the network calls, the question stopped. This brought about the SIM card consolidation phenomenon.

I believe that the Brazilian wireless subscriber base started to decrease in 2015. I found an article that suggests TIM was the first company to charge the same rate for telephone calls regardless of the service provider. In the same article, the author states that Oi then followed suit. The action of these two revolutionized Brazilian prepaid plans, and I believe, led to the demise of Oi.

In 2019 the subscriber growth rate was -1.1%, the lowest rate since 2015. I believe that the SIM card consolidation is slowing, and the wireless subscriber base hit its bottom.

NOTE: Oi is in chapter 11 and will probably sell off its mobile services segment to Vivo, TIM, and Clara.

Vivo has been the market leader since before 2008. From 2012 to 2015, the spread between Vivo and the 2nd place market leader (TSU) decreased to less than 2%, but in 2015 this trend reversed itself as TIM lost over 2.5% of its market share. Now there is a 7.19 percentage point spread between Vivo and Claro, demonstrating a clear dominance over the market.

Source: Teleco About Survey: The survey conducted considers call quality, internet quality, and the quality of the companies’ help desk. I concentrated the data only to show the companies that are the top four market leaders.

Up until 2017, Vivo was rated the best quality service provider in prepaid and postpaid segments. Claro has considerably fewer consumer complaints than Vivo, which is the reason I believe it surpassed Vivo. Though there isn’t enough data available to statistically prove the relationship between this survey and a service provider’s revenue, the bad publicity that these companies get when their ranking is low could influence consumers.

The great thing about analyzing Vivo a week after I analyzed TIM is that I can better visualize each companies’ strategy. Reading Investor Relations documents, though useful, tend to be written from a cheerleader perspective. 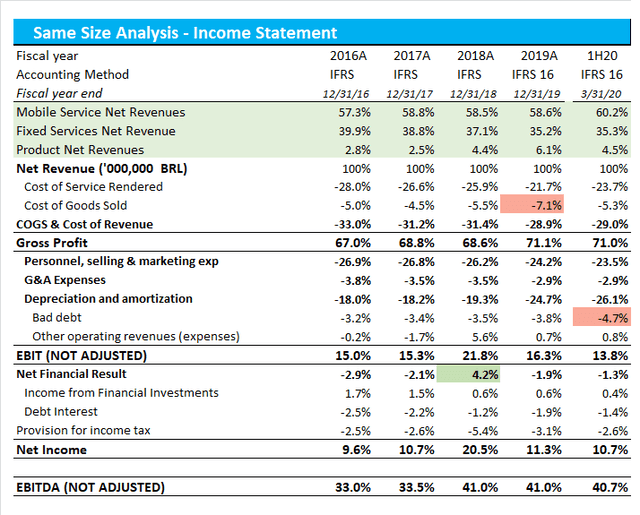 Vivo’s net revenue has increased from R$ 42.5 bn in 2015 to R$ 44.3 bn in 2019, a 1.4% CAGR. As seen in Figure 1, mobile services revenues now account for almost 60% of total net sales. Product revenue has been increasing greatly over the past four years, with a CAGR of 31.2%. Fixed services revenues (broadband internet) have declined as a percent of revenue and nominal terms (CAGR of -2.8%). The company’s strategy is to use mobile devices, sold at a discount, to attract and lock in postpaid customers. Vivo’s mobile phone contract is similar to AT&T’s, a two-year contract with exit fees if you break the contract, and in return, you can buy a smartphone at a discount.

Vivo’s profit margin has also been improving because of its strategy and because its net interest expenses as a percentage of revenue have been declining. Excluding the effects of IFRS 16, the company’s net debt has gone from R$ 4.3 billion in 1Q16 to R$ -4.2 billion in 2Q20.

I want to point out that Vivo performs leaseback operations, allowing it to improve its capital structure. The company is selling its towers to a subsidiary of Spain’s Telefónica S.A. called Telix. For those who don’t know, Telefónica S.A. is Vivo’s parent company. These operations reduced the company’s indebtedness and, consequently, its interest expenses.

That deal, intended to optimize capital allocation, comes for 641M reais in consideration (about $153M). It ensures continuity in providing mobile service by including leasebacks and establishes conditions for expanding rented space. Seeking Alpha News 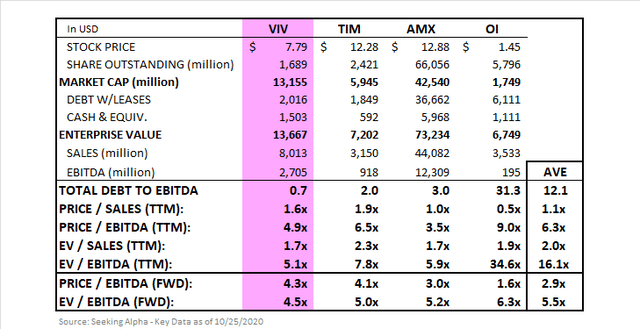 Vivo’s total debt to EBITDA is the lowest of its peers and its peers’ average, thanks to the leasebacks they are doing. Every one of the company’s TTM ratios shows the company is undervalued. But from a forward ratio perspective, it is slightly overvalued. When TTM and FWD ratios contradict each other, I prefer to look at the forward ratios as they tell us more about what is expected of the company in the future.

I am bullish on Vivo (VIV) because its market share is growing, and margins are improving. If Oi sells its mobile division to Vivo, Claro, and TIM, I believe these three companies’ conditions will improve.

If you like what you read, please “Follow” me via Seeking Alpha. I typically only cover the Brazilian markets, the Robotics Industry, and the Food Industry.

Disclosure: I/we have no positions in any stocks mentioned, but may initiate a long position in VIV over the next 72 hours. I wrote this article myself, and it expresses my own opinions. I am not receiving compensation for it (other than from Seeking Alpha). I have no business relationship with any company whose stock is mentioned in this article.

0
The Trump legal team's move over the weekend to distance itself from attorney Sidney Powell as it seeks to overturn the November 3...
Read more

0
Gov. Gavin Newsom highly criticized outing at one of California’s most exclusive fine-dining restaurants during the coronavirus pandemic this month, has reignited talks of a recall, according...
Read more

0
President-elect Biden announced on Monday that Antony Blinken would become his nominee for Secretary of State, but his apparent musical talents are getting plenty...
Read more

0
The Trump legal team's move over the weekend to distance itself from attorney Sidney Powell as it seeks to overturn the November 3...
Read more
News

0
Gov. Gavin Newsom highly criticized outing at one of California’s most exclusive fine-dining restaurants during the coronavirus pandemic this month, has reignited talks of a recall, according...
Read more
News

0
President-elect Biden announced on Monday that Antony Blinken would become his nominee for Secretary of State, but his apparent musical talents are getting plenty...
Read more
News

0
President Trump took to Twitter late Monday to respond to those who see the General Services Administration’s decision to make federal resources available to...
Read more