Theater West Virginia Is Bringing Off-Broadway Production About The UBB Disaster To Beckley.

Beckley, WV – (WWNR) – Twelve years after the explosion that killed 29 miners at the Upper Big Branch Mine in Raleigh County, a New York theater production about the tragedy is coming to the area where it happened.

Theater West Virginia announced Monday that “Coal Country” will be presented for one night only on Monday, May 9th at the Woodrow Wilson High School Auditorium in Beckley.

The docu-play was written by Jessica Blank and Erik Jansen and features music written and performed by Grammy winner Steve Earle. It premiered in 2020 at New York’s Public Theater, best known for bringing “Hamilton” to the stage. The production was cut short due to the Covid-19 pandemic, but was revived this year at the Cherry Lane Theater in New York City for a sold out limited engagement.

Theater West Virginia Executive Director Scott Hill says Audible and the Public Theater are bringing the entire production, including the cast and Steve Earle, to Beckley for a free performance.

“We were competing against Charleston, Wheeling, Huntington. . . they didn’t know where to put it. I told them that we didn’t read about this story, we lived this story. This is our story. And, even though it’s tragic, we’re glad to have it here and we’re going to treat it with the respect it deserves.”

“Coal Country” delves into the aftermath of the Upper Big Branch explosion, featuring actual first person accounts from survivors and family members. Blank and Jensen wrote it after traveling to Raleigh and Boone Counties to interview those involved.

“We are not writers coming in from someplace else saying this is what we think the story of UBB is” Blank said. “We came in and sat down with people and said tell us what the story of UBB is, and the play is a translation of that. It’s meant to honor and give a space for the folks in the UBB community to tell their own story.”

Steve Earle, who was born in neighboring Virginia, is a frequent visitor to the Mountain State, thanks to his appearances on Mountain Stage and other venues. He hopes people who didn’t get to see “Coal Country” during its original run will have the chance next month in Beckley.

“People from West Virginia have come to New York to see this show. A lot of the people that are portrayed in the show came to New York and saw it there. But there’s a lot of people who haven’t been able to make that trip.”

“Coal Country” is intended for mature audiences only, dealing with themes of death and loss in the local area and contains harsh language. “It’s stark” says Hill. “It’s real. It’s what it is. . .it is true. 29 people perished that day. And you can’t present that truly and not be upsetting.”

The first 400 tickets for Coal Country will be made available free of charge to any family members who lost loved ones at the Upper Big Branch disaster, as well as survivors and former employees by emailing coalcountryticketsubb@gmail.com. All remaining tickets will be distributed free of charge by local show sponsors. Free tickets will also be available by visiting Theatre West Virginia’s website www.theatrewestvirginia.org on a first-come, first-serve basis, while supplies last beginning at 10 am ET Friday, April 29th with a limit of two tickets per person. 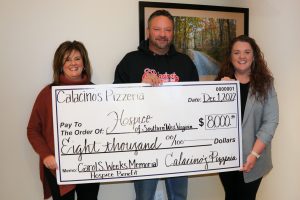